In this role, Whitaker is responsible for managing the development of Hess’ – Stampede oil and gas field in the deepwater Gulf of Mexico. Hess has a 25% working interest and is operator. He previously was responsible for developing Hess’ Subsea assets in the Gulf of Mexico and West Africa and in expanding the role of the Subsea Development Group to Hess assets offshore Europe and in the Asia Pacific Region.

Prior to joining Hess in 2005, Whitaker spent his formative years working for J.P. Kenny in a number of technical and managerial positions around the globe, culminating in his position as CEO of J.P. Kenny in Houston in 1998.

Whitaker has also held a variety of positions with BP, Technip and Atkins. He started his career in the UK with Horizon Exploration after graduating from the University of Wales Institute of Science and Technology in 1980.
Company
HESS Corporation
Company Logo 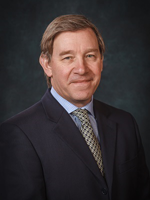